A piano as an investment?

So many beginners are given old, cheap suspect instruments to learn on and parents are surprised when they decide to give up. A piano needs to be able to respond to the subtle nuances of touch and sound which the teacher endeavours to impart even at an early “beginner stage”. When dad decides to take up golf he will soon discover that an ancient set of clubs bought at a flea market are simply not going to enhance his game. A good instrument will not only hold it’s value but will serve three or more generations admirably if properly looked after. (current price of regular annual tuning is R500)

What if my child does not take to the piano and I have spent all that money?

The fact is that if you buy a sub-standard instrument your child will probably give up lessons when he or she realizes that the piano which they have to spend so many hours practicing on, is inferior and incapable of producing the sounds that they are searching for. You will not find it easy to sell the piano and will no doubt loose out on the deal.On the other hand if you buy wisely there is a strong chance that your children will continue with their lessons. Failing which you will be able to realize much the same price if you sell the piano after a year or two. 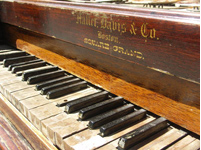 Some older instruments have been well cared for throughout their lives and may still have some useful life ahead. They nevertheless need to be assessed by someone who really knows about pianos. Old pianos are often larger and have attractive cabinets which so often influence the buyer who pictures the instrument adorning their home which has just been restored with newly sanded original floors. In many instances these pianos are +-100 years old and are in a bad condition through neglect. They have often been pushed aside into a garage or store room during decades when their popularity gave way to electronic fads and fancies. These periods of neglect weigh heavily on the instrument and certain negative trends and features develop which are irretrievable without totally rebuilding the instrument. The owner who is now selling the piano very often has no clue about the piano’s history or it’s actual current condition, and has established a thumb suck price based on what he/she has observed in news papers. Refelting the piano is not going to cater for rusty old strings and wood glues which have perished through exposure to dampness and sheer passage of time.

Pianos with overdamper mechanisms are likely to be at least 100 years old and should be avoided in most cases. These pianos are problematic and many tuner/technicians refuse to work on these instruments.

How to assess a piano:

It would be safe to say that most people are totally ignorant with regard to what to look for when buying or selling a piano and to some degree I also include music teachers and musicians in this generalization .I have put together a check list with a number of features in no particular order, which can be of use in making an assessment of an instrument’s true value:

Figure (1) – A typical over damper piano made in the 20th Century. If the piano is to be an item of display in your lounge then it is more important to have an instrument which is aesthetically pleasing. However this aspect is one which all to often sways the decision of a purchaser to the detriment of the student who has to spend hours on the piano. Most of the pianos which were made in the early 1900’s were beautiful pieces of furniture with finishes of burr walnut rosewood etc.etc. They were also usually large instruments which were more easily accommodated in larger rooms. Many of these lovely old pianos have more often than not served their time and are not capable of producing the finer nuances in touch and tone which are sought after by a teacher or student. You should also be aware that in the 1960’s It became fashionable to refurbish the cabinets of the already old overdamper pianos so as to make them look modern. Usually the front of the piano where the candlesticks used to be, was replaced by a plain veneer and the legs were removed and replaced with a plain curved leg. 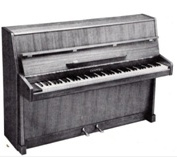 Obviously individuals need to make choices with regard to the pianos looks but never allow this aspect to overshadow the functional and tonal qualities unless you are absolutely certain that the piano can be brought into a satisfactory condition with the necessary repairs.

B) Strings, Frame and Pin block

The strings frame and pin block are best viewed when the action has been removed, however it is possible to check for the following features without that procedure:

When you open the top lid of the piano and look down onto the mechanism (action) you should be able to see all the hammers quite clearly. If they are partially hidden by a piece of wood which runs 2/3rds the width of the piano then you are looking at and over-damper action. Although there are some over damper pianos which still have a bit of useful life left in them, I strongly recommend that these be avoided if at all possible. 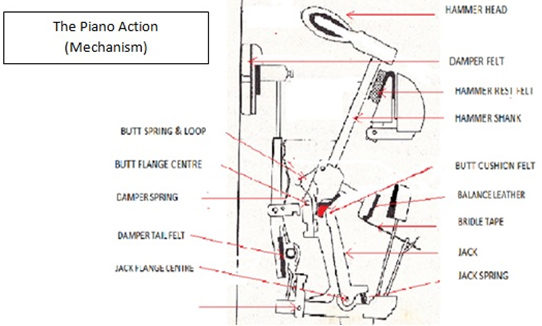 A better illustration of an upright action can be found at here:

Assuming that you are now looking at a piano with an under damper mechanism, with top flap already opened you should now release the two catches at either end of the top door and remove it in order to view the mechanism. Looking at the illustration above you will see that the mechanism is quite a complicated piece of machinery . The average upright piano has in the region of 10,000 separate parts. It is not practical for me to dwell on each of these but I will mention a few pertinent items which can be of use in an appraisal.

Most problems listed could entail complete dismantling of the mechanism which can involve large expenditure. Check the free movement of the hammers by continually depressing the soft (left) pedal up and down. If any of the hammers seem to lag behind when you release the pedal then there are tight butt flange centres. There could also be tight wippen or jack flange centres. (See above illustration)

Original ivories are only a plus factor if they are still perfect and without ugly discolouration caused by reglueing or replacements. Plastic keys generally remain white for ever and seldom discolour or become unglued over the years. If the piano has plastic keys these should be uniformly cut and not show excessive gaps in between the keys. The keys are held in place by a steel pins in the middle and in the front. Lateral movement is minimised by bushing cloth in the keys. Excessive noisy movement from side to side could mean that the key bushings need replacement. If keys stick down when depressed and do not return it could mean one of four things:

1) The lead weights at the back of the keys have oxidized and are chafing each other.
2) The key bushings have swollen and need compressing with special pliers.
3) There may have been rodent excretions which have caused the wooden keys to swell.
4) Dirt or droppings have wedged themselves between the keys and need removing.

If the keys are badly chipped this should have an influence on the price of the piano as replacement of keys can be fairly costly.

D) Sound Board and Bridges

The sound board is situated at the back of the piano and is difficult to see unless the piano is pulled away from the wall. Even then in some instances it is hidden behind a protective cloth. Most of the sound board can also be viewed from the front by removing the bottom door of the piano. The door is secured by wooden catches underneath the keyboard or by a spring which needs to be pushed upwards at the same time as pulling the door towards you. Having removed the bottom door look towards the soundboard at the back (partially obscured by the frame and strings). This should be devoid of cracks. Examine the bass bridge close to where the bass strings are anchored to see if there are any cracks where the bridge pins enter the bridge. Problems in this area can be the cause of major defects in the sound of the piano.

It would be impossible to express each of the qualities or defects in monetary terms but my prime objective is to bring these items to the attention of both buyer and seller to enable them to understand that these features must ultimately affect the price which is being asked. The bottom line is…

When deciding on a piano you should use the expertise of a reliable piano tuner/technician . The tuner should preferably be a member of the Professional Tuners Association and have good references from schools or institutions.