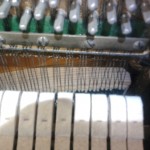 I am happy to say that queries or complaints about my work have been almost non-existent as far as I am aware. However on the few occassions that I have had queries the personalities involved have been people who don’t actually play the piano. A recent experience which I have had would be a typical case in point. The lady in question was present when I tuned her baby grand and was complimentary when I tested my work by playing pieces which embraced the entire keyboard. The following day I received a call from her to say that her 7 year old grand daughter(who is not a pianist either) had tested the piano and had found that the notes at the top of the piano were “flat”. I immediately knew that he word “flat” was not a reference to the tuning but more a description of the lack of clear musical sound and when I revisited this customer, I was able to explain that the notes in the extreme treble would always have a thinner sound for the following reasons: